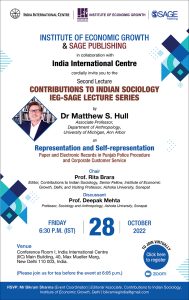 Abstract: In 2013, the Indian state of Punjab contracted with a corporation to operate a new police phone helpline. The corporation call centre not only took complaints, but also monitored, directed, and reported police responses to them. An original provision of the Indian Code of Criminal Procedure, maintained since 1861, requires that oral testimony of complainants must be ‘reduced to writing’ by an authorised official. This requirement has been strained by the integration of corporate call centre customer service practices into the Punjab State police procedures. Audio recordings and database text records of complaints have only some of the features of writing and are not produced by a government officer. Nevertheless, the composite records generated by the call takers through corporate customer service software form the basis of quasi-official police proceedings. We can see in this arrangement two parallel tensions: first, a tension between two forms of human and technological mediation—the paper-based records of police and the call centre voice and database records; second, a tension between two conceptualisations of a political subject within bureaucratic procedures: one requiring representation by another authorised person and the other able to present him or herself.

To register for this event please visit the following URL: https://bit.ly/3CTvPEg →